Blog post: A day in the life of a Wombat Caretaker at Richard Underwood Nature Refuge

Imagine being among the first in the world to witness a precious Northern Hairy nosed Wombat joey take its’ first steps outside the burrow.

Volunteer caretaker, Leanne Bowden, shares this “once in a lifetime” experience. 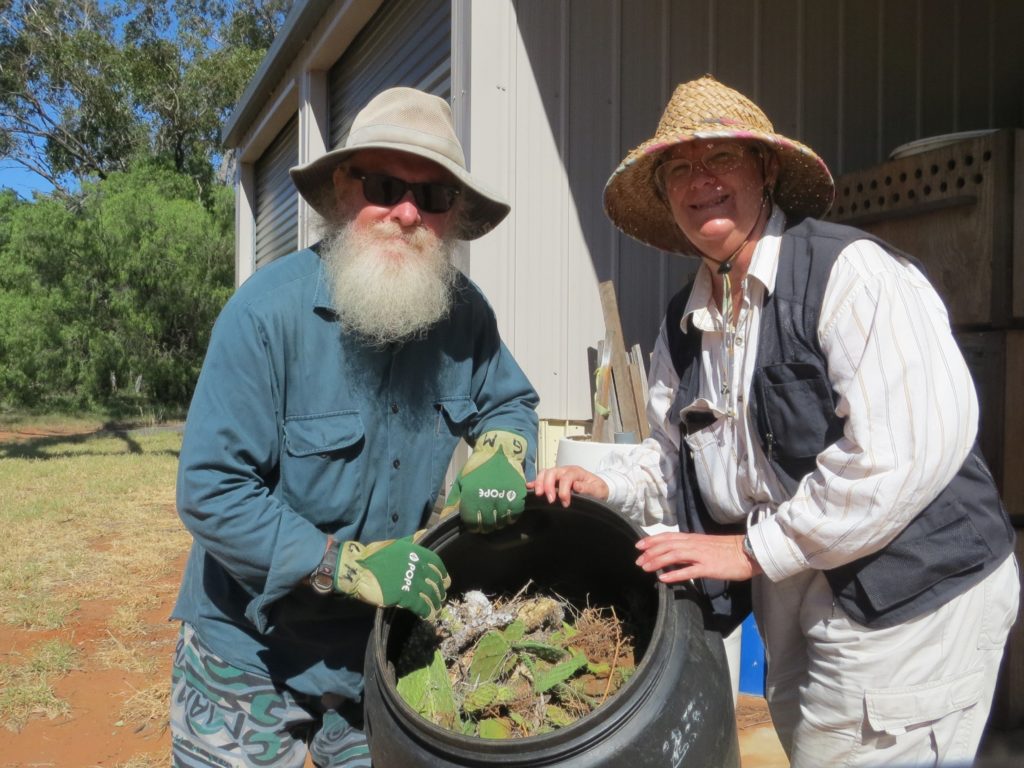 We’ve experienced every season over 13 months volunteering at Richard Underwood Nature Refuge (RUNR) between May 2011 and February 2018.  It’s been wonderful to download the data from the burrow entrance remote sense cameras. We’ve seen wombats rolling around in the long grass, basking in the sun during cold days, looking bedraggled in the wet, and digging out dust storms in the dry.

However, one day that stands out like no other, is the day that the fourth Joey born at RUNR was captured on film for the first time.

The 22nd June 2017 started like any other day. We were there to check the fences were undisturbed and to change the SD cards in about 25 cameras monitoring 18 burrow sites.

The 2 metre high chainwire fence is designed to protect the wombats from external threats. It has a floppy top to prevent animals climbing in, and a metre wide skirt inside and out to deter digging close to the fence.  Echidnas often push through under the 2 metres of wire skirting, creating bulges that need to be pegged down again.

We’ve had the shock of seeing an enormous pile of dirt thrown across the boundary track, where a wombat has chosen to start digging a new burrow right on the edge of the skirting.  As that might create an inroad for predators, we’ve infilled these holes, to subtly deter digging in that spot again. Particularly after storms, we’ve removed branches and trees that have fallen down across the fence.

But on this day, all was in good order.

We did the zigzag walk for a few hours around the Refuge to reach all the cameras.   It’s important to be alert, as we have come across snakes basking at the base of cameras, or harmless goannas which simply give you a fright.  Camera positioning depends on what’s happening on site, and in June 2017, most focus was on three burrows where Mother Wombat was regularly filmed, waddling about with a very large Joey sometimes inside, and sometimes half out, of her pouch.

Then came the night when she was filmed entering a burrow with Joey in the pouch, and the next night exiting with an empty pouch.   Ten days had passed since the pouched Joey had been seen. With much liaison with the Project Leader at the Department of Environment and Science, extra cameras had been positioned to hopefully capture the moment when Joey appeared.

Anxiety regularly reigned during the wait between downloads.  Were we being discreet enough when visiting burrows so as not to disturb the occupants? Were the cameras aligned correctly?  Had we remembered to actually turn them back on after changing the SD card? Had there been any disturbance of cameras on tripods from foraging animals overnight?

But on this day, the stage had been set, all was in order and remote Wombat paparazzi were in place.

It was back to base to start the download.  Often there are over two hundred films to watch from across the site, needing to be viewed from beginning to end, as wombats have been known to appear in the very last second of filming.

With great anticipation, the first of the SD cards from the burrow of the last sighting of Mum Wombat went into the card reader.  She came out of the burrow in reverse, which was slightly unusual, still with an empty pouch. She went back in. Moments later, she reversed back out again, observed her surroundings for a while, and went back in again.

We’d downloaded eight films by now, and we were curious about what was happening.  After a few moments, she was reversing out again, and she stopped with her nose still in the burrow.  Finally, from beneath her chin, a mini wombat head appeared, looked at the world, and despite her nuzzling encouragement, it disappeared back down the burrow.  It was a few minutes later before it appeared again, staying close to, or underneath, Mum. Joey 4 had now definitely arrived, and looked fit and healthy.

Mum was very supportive, her front paws directing, her nose gently guiding, encouraging it to stay outside when it clearly wanted to go back in.  Hesitantly it ventured a little distance to sniff the dirt and scratch about, before quickly running straight back under Mum for protection. After 10 minutes of allowing it to move about and get used to this outside world, she walked it away from the burrow, scampering along behind trying to be as near to that pouch as possible.

Absolutely delightful activity between Mum and her Joey was captured at three burrows at intervals during the four hours that Joey was out and about -  its emergence from and leaving one burrow, arriving at another to venture in and out for a couple of hours, and then finally entering a different burrow an hour later, to follow Mum in and not be seen for the next couple of weeks.

It was a very rewarding event to witness, albeit on film.  It is especially poignant as this little one is the result of natural conception, without any interference other than cameras to monitor activity.

We have thoroughly enjoyed and been rewarded by all our days at RUNR, but being lucky enough to be there to download this unique footage is one day that could be counted as a “Once in a Lifetime”. 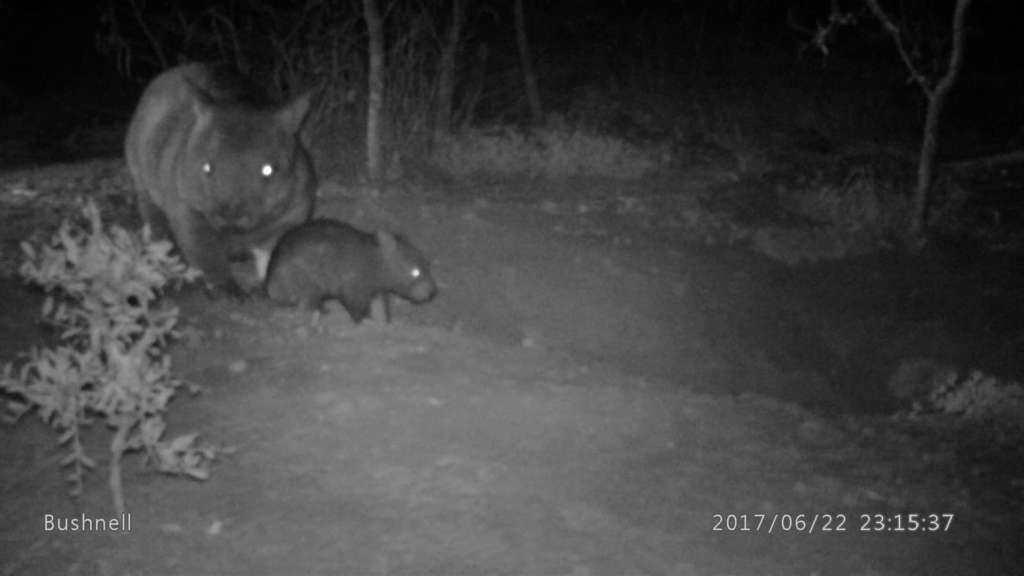 Mum and Joey wombat at RUNR